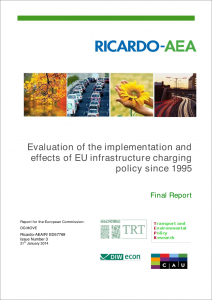 The EU has been working towards the development of a common framework for the charging of road freight transport for over 40 years. An impact assessment study was commissioned to RICARDO-AEA, TRT, DIW Econ and CAU by DG Mobility and Transport to evaluate transport infrastructure charging policy in the EU.
The assessment period for this study starts from 1995, with the publication of the Green Paper “Towards fair and efficient pricing in transport” (COM (95) 691). The paper advocated charging users for the full social costs of their journeys in order to reduce transport problems and make Europe’s economy more competitive. After 1999, the primary policy instrument of interest is Directive 1999/96 (the ‘Eurovignette’ Directive) and its subsequent amendments, as well as the Directive 2004/52 on the European electronic toll service.
The report is concerned with the first part of the study carrying out both an ex-post evaluation of transport infrastructure charging policy since 1995, and an ex-ante evaluation of recent amendments to the Eurovignette Directive (as enshrined in Directive 2011/76/EC). The evaluations reported are very broad in nature and required a series of challenging questions and issues to be addressed in parallel: nine main questions and issues for the ex-post evaluation of the Eurovignette Directive and four specific questions for the ex-ante evaluation of Directive 2011/76/EC.