The project has supported the feasibility study providing focus analyses on transport aspects and has developed the cost-benefit analysis of the Bus Rapid Transit (BRT) network envisaged by the Sustainable Urban Mobility Plan of the Municipality of Taranto, which, among others, has the objectives of tackling the private traffic in the central area of the city and a substantial transformation of the public transport services.

Technically, the project of the BRT consists of (i) high-capacity vehicles, with low (or none) emission of pollutants, low loading platforms and (ii) a partially segregated alignment, with stops equipped and comfortable, and supervised by a control system to prioritise the traffic lights of the BRT with respect to road traffic. 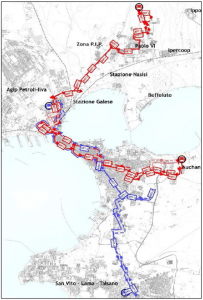 The two lines partially overlap for 9 km to double the frequency in the central area of the city.

TRT contributed to the project in two phases.

Also, the cost-benefit analysis has developed the risk analysis, both qualitative and quantitative. The latter was developed with a specialised software. 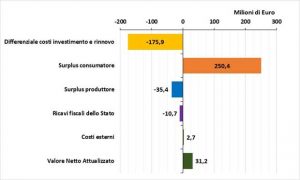 For both phases, the cost-benefit analysis was developed relying on the outputs of the traffic simulation model and on the data of the investment and operating costs.

CLIENT
TecnoSistem/IDOM for the Municipality of Taranto