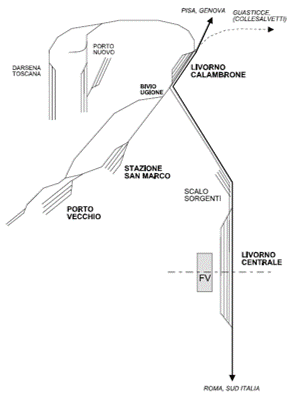 TRT, with Vega Engineering, was in charge of the feasibility project for the development of railway network of the ports of Livorno and Piombino. The objective of the work is to quantify the transport demand observed in the past, with reference to the movement of goods and passengers and, at the same time, to estimate the future freight flows, also using the transport simulation model –TRUST, developed by TRTv that works at European scale.

The project proposals envisage the improvement of the capacity of the existing terminals and their progressive adaptation to international standards. On the basis of the proposed project alternatives, a specific study was made of the railway capacity of the system in terms of the number of trains that can be operated by the two ports, verifying that the long-term demand forecasts can be met by the planned planning schemes, while also maintaining residual capacity .

The transport performance of the railway system, together with the design characteristics (costs, construction times, etc.), constitute the database that has allowed the development of a Multicriteria Analysis that has compared the different design alternatives. A Cost Benefit Analysis was conducted, to assess the advantages and disadvantages of the project for the community.