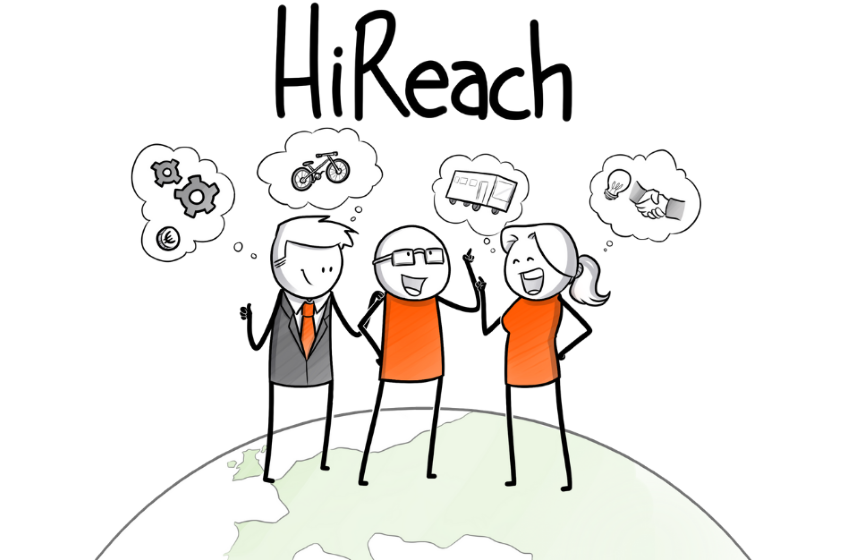 The HiReach project, in collaboration with Impact Hub Vienna, has launched the HiReach Startup Lab, a Europe-wide accelerator program for mobility startups. The program is an opportunity to develop innovative solutions that address transport poverty. HiReach supports startups willing to improve the accessibility of urban and rural areas considering the needs of vulnerable citizens (low-income, women, children, elderly, migrants, etc.).

The accelerator program offers startups a unique opportunity to prototype their solutions with the support of a dedicated Host Company, professional business coaching, and financial support up to 20.000 EUR. The top 5-10 startups will showcase at the ITS European Congress in Lisbon in May 2020 and during the demo day in Brussels in September 2020.

END_OF_DOCUMENT_TOKEN_TO_BE_REPLACED

We look for a junior consultant to join our team in Milano. The position will involve working as part of a multidisciplinary team in freight transport and logistics. The candidate will work in research projects as well as in consultancy services including strategic consultancy, market analysis, surveys and impact assessment projects.

He or she will develop quantitative analysis, support the drafting and publication of reports, source and write scientific articles and contribute to communication, information and dissemination tasks within the projects.

END_OF_DOCUMENT_TOKEN_TO_BE_REPLACED 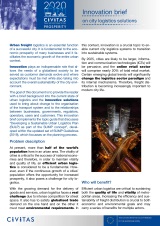 The document, written by TRT as partner of the PROSPERITY  project, provides a background into the current state of urban logistics. It also illustrates a series of policy options and innovative solutions that could bring about change to the organization of the freight transport in cities.

END_OF_DOCUMENT_TOKEN_TO_BE_REPLACED

The European project “HARMONY” was launched in London

TRT is partner of the international consortium appointed by the European Commission (Innovation and Networks Executive Agency, INEA) to exploit the HARMONY project Holistic Approach for Providing Spatial & Transport Planning Tools and Evidence to Metropolitan and Regional Authorities to Lead a Sustainable Transition to a New Mobility Era”. The project envisages developing a new generation of harmonised spatial and multimodal transport planning tools which comprehensively model the dynamics of the changing transport sector and spatial organisation, enabling metropolitan area authorities to lead the transition to a low carbon new mobility era in a sustainable manner. At the same time, demonstrations of new mobility services such as electric AVs and drones for freight delivery will take place to understand in real-life their requirements and impacts. The concepts and the model suite will be applied and validated on six EU metropolitan areas: Rotterdam (NL), Oxfordshire (UK),Turin (IT), Athens (GR), Trikala (GR), Upper Silesian-Zaglebie Metropolis (PL).

END_OF_DOCUMENT_TOKEN_TO_BE_REPLACED

TRT Trasporti e Territorio is an independent consultancy specialized in transport economics, planning and modelling. Established in 1992, the Company has earned a solid international reputation in supporting public and private actors thanks to its professional and R&D activities in the fields of transport projects appraisal and policy assessment.

We look for an intermediate/senior Policy Analyst to join our team in the Brussels and/or Milano office. The position will involve working as part of a multidisciplinary team in transport policy projects. The candidate Policy Analyst will work in research projects as well as in consultancy services and will operate in an international environment in partnership with companies and universities of different EU countries. He or she will develop quantitative analysis, support the drafting and publication of reports, source and write scientific articles and contribute to communication, information and dissemination tasks within the projects.

END_OF_DOCUMENT_TOKEN_TO_BE_REPLACED

Survey on the international freight transport – 2016 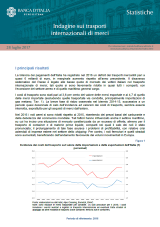 TRT has been commissioned by the Banca d’Italia (Italian Central Bank) to carry out a four-year survey on the international freight transport in order to:

This project follows similar surveys managed by TRT since 1998, whose results are used by Banca d’Italia to estimate the Balance of Payments for the corresponding years.

END_OF_DOCUMENT_TOKEN_TO_BE_REPLACED 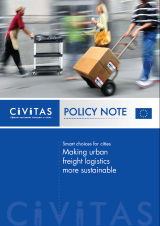 Within the consortium of the CIVITAS WIKI project, TRT was responsible for drafting this Policy Note, focusing on the topic of urban freight logistics.
Freight distribution is a vital part of life in modern cities and plays a relevant role within the whole urban mobility system. Although urban freight systems have not received much attention to date, actual demographic trends showing an increasing urbanization, together with the pervasive role of information and communication technologies and the consistent growth of e-commerce are bound to pose further challenges to the urban freight system. Among the different components of urban mobility, urban freight logistics is in fact traditionally considered as the least sustainable because of its evident negative impacts (generating noise and pollutant emissions, increasing congestion and posing a threat to the safety of road users).
That is why it is necessary to encourage the reflection upon these issues, the sharing of experiences and best practices between cities and the raising of awareness among decision-makers in order to trigger alternative, and more sustainable, approaches to urban freight planning.

END_OF_DOCUMENT_TOKEN_TO_BE_REPLACED

This study presents a discussion on alcohol interlocks in terms of their use, effectiveness and contribution to road safety. While summarising the most recent road safety developments and providing an account of the drink-driving phenomenon, the study outlines the technical requirements for the use of these devices and the various methods of use currently established in EU Member States. The study concludes with an analysis of their cost-effectiveness in relation to their deployment in the commercial road transport sector and specific users categories.

END_OF_DOCUMENT_TOKEN_TO_BE_REPLACED 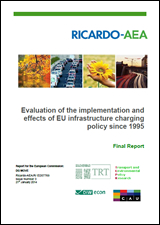 The EU has been working towards the development of a common framework for the charging of road freight transport for over 40 years. An impact assessment study was commissioned to RICARDO-AEA, TRT, DIW Econ and CAU by DG Mobility and Transport to evaluate transport infrastructure charging policy in the EU.
The assessment period for this study starts from 1995, with the publication of the Green Paper “Towards fair and efficient pricing in transport” (COM (95) 691). The paper advocated charging users for the full social costs of their journeys in order to reduce transport problems and make Europe’s economy more competitive. After 1999, the primary policy instrument of interest is Directive 1999/96 (the ‘Eurovignette’ Directive) and its subsequent amendments, as well as the Directive 2004/52 on the European electronic toll service.
The report is concerned with the first part of the study carrying out both an ex-post evaluation of transport infrastructure charging policy since 1995, and an ex-ante evaluation of recent amendments to the Eurovignette Directive (as enshrined in Directive 2011/76/EC). The evaluations reported are very broad in nature and required a series of challenging questions and issues to be addressed in parallel: nine main questions and issues for the ex-post evaluation of the Eurovignette Directive and four specific questions for the ex-ante evaluation of Directive 2011/76/EC.

END_OF_DOCUMENT_TOKEN_TO_BE_REPLACED 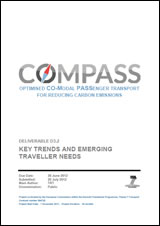 Within the COMPASS Project, TRT has conducted an extensive research activity (based on a consistent number of studies and scientific publications) aiming at identifying the main drivers and trends (in social, economic, environmental and technological domains) that are likely to play a dominant role in the next decades (2050) in Europe and influence current and future mobility patterns. The work has produced a the COMPASS deliverable D.3.2  and a website, internally developed by TRT, allowing the user to identify, check and review the insights from literature and to access and download the documents of the bibliography.